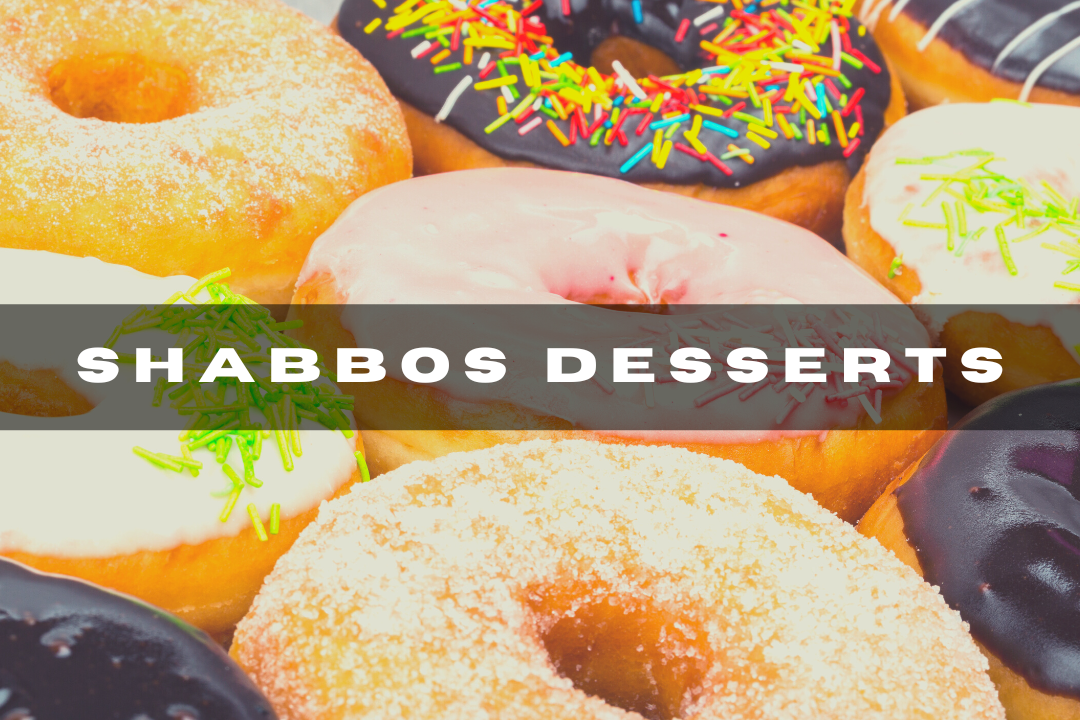 Shabbat desserts are the Jewish Sabbath, which begins at sunset on Friday and ends at nightfall on Saturday. During this time, many Jews observe certain religious restrictions, such as not cooking or using electricity. As a result, traditional Shabbat desserts are often dishes that can be prepared ahead of time and do not require any additional cooking or heating. Some examples of Shabbat desserts include:

Challah bread pudding is a traditional Shabbat dessert that is made using leftover challah bread. The bread is soaked in a mixture of eggs, milk, sugar, and spices, and then baked in the oven. Some variations may also include ingredients such as raisins, nuts, or chocolate chips. The result is a warm, sweet, and comforting dessert that is perfect for a relaxing Shabbat dinner. Some traditional recipes also include soaking the challah in a mixture of eggs, milk, sugar, vanilla, and cinnamon, and other variations also include a mixture of sugar, butter, vanilla, eggs, and milk.
It’s popular and easy to make for those who enjoy cooking and baking.

Fruit compote is a traditional Shabbat dessert that can be made ahead of time and does not require any additional cooking or heating. It is a simple dish that consists of cooked or stewed fruit, typically mixed berries or stone fruits, sweetened with sugar or honey and sometimes spiced with cinnamon or vanilla. The fruit is cooked until it becomes soft and releases its natural juices, creating a flavorful and sweet sauce.

Fruit compote can be enjoyed as a dessert on its own or served over ice cream, yogurt, or pancakes. It can be made with fresh or frozen fruit and can be served warm or cold. It’s a great way to use up seasonal fruits and it can be stored in the refrigerator for a few days.

The compote can be made with different kinds of fruits, like apples, pears, apricots, plums, peaches, and berries. Each fruit may have a different cooking time. It’s a great way to have a sweet and healthy dessert without too much added sugar.

Baked apples are a traditional Shabbat dessert that are easy to prepare and do not require any additional cooking or heating. They are a simple dish that consists of whole apples that are cored, stuffed with a mixture of sugar, cinnamon, and butter, and then baked in the oven. The apples become soft and sweet, and the filling creates a flavorful and fragrant center.

Baked apples can be made with any type of apple, but Granny Smith, Honeycrisp, and Braeburn are some popular choices. They can be served warm, topped with a dollop of whipped cream or a scoop of vanilla ice cream. They can also be chilled and served cold.

The stuffing inside the apple can vary, you can add nuts, raisins, or dried fruits, this way you can add some more flavor and texture to the dish. Some variations also include adding a splash of brandy or other spirits, which adds a delicious depth of flavor.

Baked apples are a healthy and delicious dessert option, they are low in calories and high in fiber, antioxidants, and other essential nutrients.

Honey cake is a traditional Shabbat dessert that is often served during the Jewish New Year (Rosh Hashanah) as a symbol of a sweet new year. It is a moist and flavorful cake that is made with honey as the main sweetener, along with other ingredients such as flour, eggs, sugar, spices (such as cinnamon and nutmeg), and sometimes coffee or tea.

The recipe for honey cake can vary depending on the region, family, or personal preference. Some variations include the addition of nuts, raisins, or dried fruits, and some variations are also gluten-free or dairy-free.

Honey cake is usually baked in a loaf or bundt pan, and it can be served as is or topped with a glaze made of honey, powdered sugar and lemon juice.

Honey cake is a symbol of the Jewish New Year and is enjoyed by many Jewish families. It is considered as a traditional and sweet dessert that is perfect for the holiday season.

It is a moist and flavorful cake, the honey gives it a unique taste and it’s a great way to use up honey that you might have in your pantry.

Rugelach (a type of Jewish pastry)

Rugelach is a traditional Jewish pastry that is often served as a dessert or a snack. It is a small, crescent-shaped pastry that is made with a flaky dough similar to croissant dough, and filled with a variety of sweet fillings such as fruit preserves, nuts, chocolate, or cinnamon and sugar.

The dough for rugelach is made with flour, butter, cream cheese, and sour cream. The dough is rolled out and then filled with the sweet filling of choice, then rolled up and shaped into crescent shapes.

Rugelach is a very popular pastry in Jewish cuisine, it’s often served during holidays, such as Hanukkah and Passover, but it can be enjoyed all year round.

There are different ways to shape rugelach, it can be shaped as crescents, spirals, or rolled and cut into slices. The fillings also vary, they can be made with jam, chocolate, nuts, and cinnamon sugar.

Rugelach is a delicious and easy to make the pastry, it’s perfect for holidays, special occasions, or as a treat for your family and friends.

Kugel (a type of Jewish casserole)

Kugel is a traditional Jewish casserole dish that is often served as a side dish or a dessert. It is made with a variety of ingredients such as noodles, potatoes, or matzo, and is typically sweetened with sugar or honey and spiced with cinnamon, nutmeg, and vanilla. Kugel is often made with dairy ingredients such as eggs, cream, and cottage cheese or sour cream, and sometimes it can be made with a meat or a fish.

Kugel is a popular dish in Jewish cuisine, it’s often served during holidays, such as Passover, but it can also be enjoyed all year round.

It’s typically a sweet dish, however, there are savory versions of kugel that are made with meat or fish, and it’s common to see variations with vegetables too.

Kugel is a comforting and delicious dish that has a long tradition in Jewish cuisine, it’s easy to make and can be served as a side dish or a dessert.

Cholent is a traditional Jewish stew that is typically cooked overnight, often on a low heat, and is served for the Sabbath lunch on Saturday. It is a hearty and flavorful stew that is made with a combination of ingredients such as beef, potatoes, beans, barley, and vegetables such as onion, carrot, and celery. The stew is seasoned with spices such as garlic, paprika, and black pepper, and is often sweetened with a small amount of sugar or honey.

The origins of cholent can be traced back to medieval times, when Jewish communities were not allowed to cook on the Sabbath, due to religious laws. Cholent was a way to prepare a hot meal for the Sabbath without breaking the law. The stew is traditionally cooked overnight, starting on Friday before the Sabbath, in a pot or slow cooker, and is left to simmer on a low heat until Saturday lunch.

There are different variations of cholent, depending on the region and the family traditions, some variations include adding kishke (a type of stuffed dumpling), chicken or goose fat, or different types of beans, such as kidney beans, chickpeas, or lentils.

Cholent is a comforting and delicious dish that has a long tradition in Jewish cuisine, it’s perfect for a Sabbath lunch and it’s easy to make.

Compote is a fruit-based dessert that is made by cooking fruit in a sugar syrup. The fruit is typically cut into small pieces and simmered in a mixture of water, sugar, and sometimes spices such as cinnamon or vanilla. The fruit releases its natural juices, creating a sweet and flavorful sauce. The end result is a soft and sweet fruit compote that can be served warm or cold.

Compote can be made with any type of fruit, but it’s commonly made with berries, stone fruits, or apples. Berries such as strawberries, raspberries, and blueberries are popular choices, as well as peaches, plums, apricots, and apples. The fruit can be fresh or frozen and the compote can be made with a variety of sweeteners such as sugar, honey, or maple syrup, depending on the recipe or personal preference.

Compote is a versatile and easy to make dessert, it can be enjoyed as is, or served over yogurt, ice cream, pancakes, or waffles. It can also be used as a filling for pastries, cakes, and tarts. Compote can be stored in the refrigerator for a few days, making it a great make-ahead dessert.

In conclusion, traditional Shabbat desserts are often dishes that can be prepared ahead of time and do not require any additional cooking or heating during the Sabbath. Some popular examples include Challah bread pudding, fruit compote, baked apples, honey cake, Rugelach, Kugel, Cholent, and Compote. These desserts are often steeped in tradition and culture and are enjoyed by many Jewish families during the Sabbath and holidays. They are easy to make and can be enjoyed by people of all ages. They also include a variety of ingredients that can fit different dietary restrictions.